Whichever way you drive to Duncan, be sure to watch speed limits as you come into town. Sheriff Tim Sumner and his officers do enforce the law. And remember: if you pass cyclists on the road, they are not required by law to move off the lane onto the shoulder, and they won’t do so unless it is safe for them. You, on the other hand, are required to allow at least three feet between the side of your vehicle and the bike you are passing.

Now, first, the most direct routes to and from Duncan. 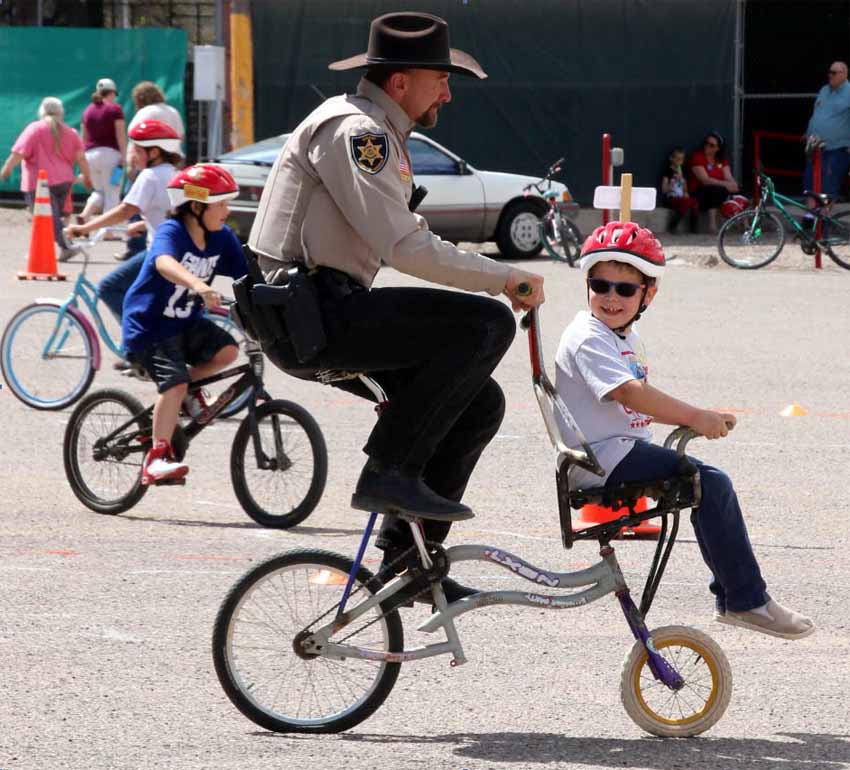 Take I-10 East to Highway 60 East and climb into Devil’s Canyon toward Globe. Stop, if you can, at the Boyce Arboretum, or in Globe’s historic Old Town. In Globe, you’ll continue on Highway 70, also known as The Old West Highway. If the big casino in the San Carlos Reservation doesn’t distract you, continue on to and through Safford. After you climb up out of the wide San Simon basin east of Safford, Highway 70 will wind you through some beautiful hills into the Gila River green belt that contains the town of Duncan. Turn right on Main Street and watch for the two-story brick hotel on your right.

Take I-10 East to Highway 191 North to Safford. When you reach Highway 70, the main east-west route through Safford, turn right. Another 40 or so miles east you’ll arrive in Duncan. Turn right on Main Street and look for the Simpson Hotel on the right. Alternatively, stay on I-10 into New Mexico and exit at Lordsburg to pick up Highway 70 west. From there you’ll have a 35-mile drive across the desert and back into Arizona and Duncan. As the road winds you into town, you’ll see the Ranch House restaurant on the right. Then, just past Hilda’s Market and the Stage Stop gas station, turn left on Main Street and watch for the two-story brick hotel on your right.

From Santa Fe and Other Points Northeast or East

Take your chosen route to Lordsburg, New Mexico, on I-10, and exit there onto Highway 70, heading west. In 35 miles you’ll be over the border into Arizona and heading into the town of Duncan. Look for the Ranch House restaurant on the right. Then, just past Hilda’s Market and the Stage Stop gas station, turn left on Main Street and watch for the two-story brick hotel on your right.

Next, the less direct and more scenic routes. 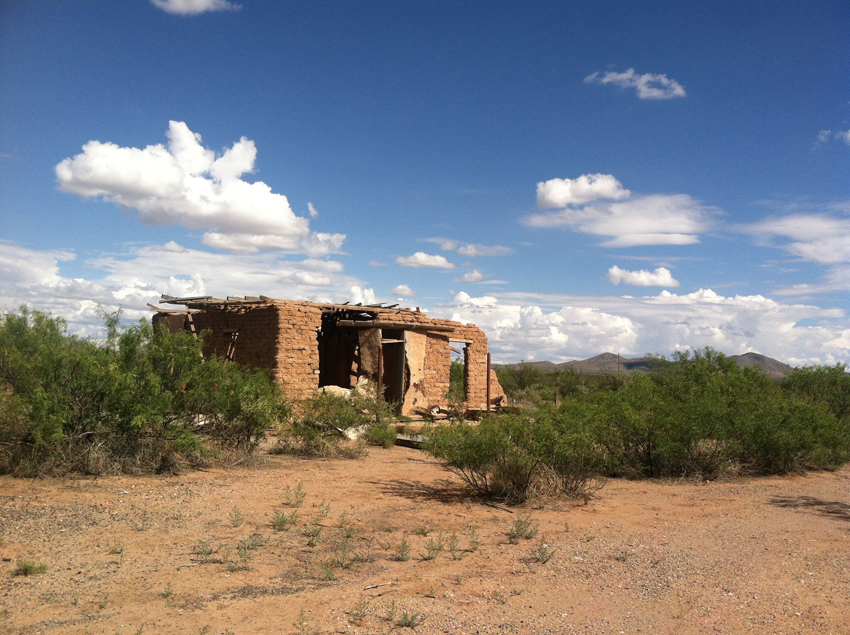 Take a drive through Cochise County, especially if you’ve never seen it. Depending on how much time you have, you can choose whether to head south from I-10 on 19 to Nogales, 83 to Sonoita, 90 to Whetstone or 80 to Tombstone. From Tombstone, Gleeson Road is a gorgeous local connector that will take you to 191 on the northern edge of Elfrida. Or, if you go down through Bisbee, an enchanting and picturesque town, use your navigator to catch Double Adobe Road over to 191, and then Kansas Settlement Road up to 186 and Willcox. From Willcox cross over I-10 and take Ft. Grant Road to 266 and on to 191 north into Safford—it traverses orchards, a huge medical marijuana plantation, and a particularly lovely part of the Coronado National Forest at the foot of Mt. Graham, the second highest peak in the state. From there, follow the directions above from Safford to The Simpson.

OR – from Bisbee, stay on 80 East to Douglas, and be sure to stop and see the exquisite lobby of the Gadsden Hotel with its huge stained-glass dome (they also have a nice café). Continue on 80 up along the eastern flank of the Chiricahua Mountains, and you’ll cross the New Mexico border right at the tiny town of Rodeo. Check out the Chiricahua Desert Museum there. Just north of Rodeo is the turnoff that will take you to Portal, Arizona, the hub of Southwest Research Station visitor activity. Cave Creek Canyon, further up that road, is world-famous bird and wildlife habitat. Route 80 will take you on to I-10, which you catch east to Lordsburg, New Mexico, then picking up Route 70 back into Arizona and on to Duncan.

To or From El Paso

Cyclists take note of this route, for we have sent many a peddling traveler this way. Highway 9 out of El Paso is the way to go if you’re game for long stretches of two-lane blacktop that are flat, scenic, and remarkably free from traffic. You can go for miles and miles without seeing any other travelers except local ranchers and the ever-present Border Patrol. It’s a stretch from El Paso to charming little Columbus, New Mexico – about 80 miles. But it’s worth it if you can make it. No matter what you’re driving or riding, enjoy Columbus’s terrific little restaurants, and you can camp if you like at Pancho Villa State Park (visit the town’s excellent museum to learn about the murderous 1916 raid on Columbus by Villa’s men). Or stay at our favorite little motel, the Hacienda de Villa. 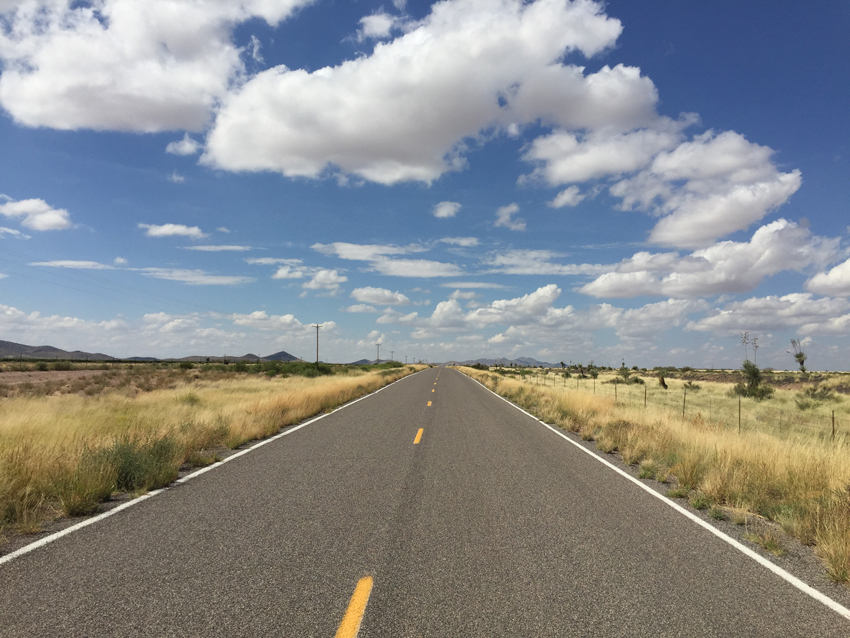 The road from Columbus to El Paso, New Mexico

From Columbus it is 44 miles west to the almost ghost town of Hachita, gateway to the Big and Little Hatchet Mountains that mark the border with Mexico. Don’t be fooled by the quiet: Hachita is very much alive. The store, with gas pump, is open daily from 7 am to 8 pm. And there is a very special feature for cyclists: Jeffery Sharp’s “Bike Ranch” on the west end of town. Jeff will give you a cot for the night and he’ll feed you, all for a tiny fee. Cyclists also are invited to camp indoors, for a donation, at the Hachita Community Center. Either way, call Jeffery at 575-519-9111. The Bike Ranch also houses hikers on the Continental Divide Trail.

From Hachita it’s about 15 miles west on Route 9 to the junction with 113 north, which you then take to I-10, another 20 miles exactly. We have seen deer and antelope on those beautiful high desert grasslands, and innumerable birds of prey. You must then tolerate I-10 for about 10 miles into Lordsburg, where you get off to pick up 75 into Arizona and Duncan. There is one excellent restaurant in Lordsburg: Ramona’s Café. Call ahead to make sure she’ll be open: 575-542-3030.

The Back Way To or From Silver City, New Mexico

This route is not a lot longer than the more direct Route 90 to Route 70 way, and it adds immeasurably to the pleasure of the trip. Take 180 west and north out of Silver City toward the little town of Cliff. On the way you will cross the Gila River in one of its northernmost floodplains as it flows out of its headwaters in the Gila Wilderness. You’ll see on the horizon on your right the formidable Mogollon Mountains, the only range in this part of the southwest with east-west orientation, unlike the north-south “basin and range” features that dominate the region. It’s only because of the cloud-catching Mogollon Rim that our part of the world is not all dry desert.

At Mule Creek you’ll turn southwest on Route 78, which carries you over hypnotically beautiful rolling rangeland into the Gila National Forest, and over the border into the Apache-Sitgreaves National Forest and down into the Gila River basin in Arizona. At the “Three-Way” intersection, just past an abandoned outdoor theater, turn left onto Route 75. It’s 20 miles from there to downtown Duncan. Don’t turn on Route 70 – go straight across onto Main Street and look for us on the right.

Motorcyclists have come from all around the world to ride the celebrated Coronado Trail (U.S. 191, formerly 666) between Alpine and Clifton, and on to Duncan. We welcome those adventurers – in fact we have created an outdoor fire pit to enhance their decompression experience once they’ve had enough of the saloon at the corner. For ordinary mortals, however – anyone who isn’t big on white-knuckle drives – we recommend a different route to or from Alpine and Springerville. Instead of heading south on 191 at Alpine, take 180 toward Silver City, New Mexico. This glorious highway traverses multiple ecotones and affords some stunning views that don’t put you at risk of tipping off the mountainside. Stop at the little café and store in tiny Alma. Further south, on the northern edge of Glenwood, is the turnoff to the remarkable Catwalk in the Gila National Forest. It is a wonder in any season. Just make sure you’re warmly dressed if the outdoor temps aren’t comfortable. And take plenty of water. Glenwood itself is home to Udder Delights, maker of fine, affordable soaps and lotions and more, with goat milk as a main ingredient. They make our little hotel soaps for us, and we are regular users of several other products. It’s an ideal stop for gifts.

From Glenwood it’s another stunning drive to the 78 turnoff in Mule Creek. Do stop at the Aldo Leopold Overlook on 180. Once you reach the 78 turnoff, follow directions in the previous section.